We often have the tendency in our culture to believe if a little of something is good, then a lot of it must be better. Although this might be true for some things, it definitely is not the case when it comes to watering and fertilizing your Houston commercial property.

In fact, it's usually the opposite. So, just how much water is too much?

Let Your Plants and Lawn Tell You

Other than just walking around your lawn and feeling if it is squishy, here are some signs to look for when it comes to over-watering:

All of these are signs you probably have a fungus problem. Fungi only grow where there’s moisture that can be caused from wet weather, bad drainage or over irrigating.

What are the most common types of fungi in Houston?

The most common fungi in Houston are Brown Patch, Take All Patch (TAP), Powdery Mildew and Black Spot.

Brown patch typically appears in the late fall and early spring when the temperature ranges from 60 to 85 degrees. If you notice your lawn has Brown Patch, only water when the top 1 inch of the soil is dry, and rake up the dead and diseased grass. Do not increase water or apply fertilizers.

Take All Patch (TAP) appears as irregular-shaped brown patches. TAP is more prevalent in lawns that are frequently watered for short periods of time. TAP prefers warmer weather and can occur anytime from late spring to early fall. Follow the same procedure as Brown Patch when treating for TAP.

Powdery Mildew appears as a white or grayish powder covering the new leaves and shoots of some plants. It is most commonly found during early spring and late fall. Powdery mildew typically infects weak, stressed and unhealthy plants, which can all be caused by overwatering. If your plants show signs of Powdery Mildew, first remove the affected areas and then apply organic fungicide.

Black Spot appears as small black dots and typically only affects roses. If left untreated, the leaves will begin to yellow and eventually fall off. Black Spot thrives in warm, humid conditions. Black Spot can result when water remains on the leaves for extended periods of time.

To avoid getting Black Spot on your roses, water only the top of the soil and keep good airflow between each plant. To treat Black Spot, remove all of the affected leaves, and rake the ground below clean. Next, add a fresh layer of mulch, and apply an organic fungicide.

Need a second opinion? Give us a call, or request a proposal. 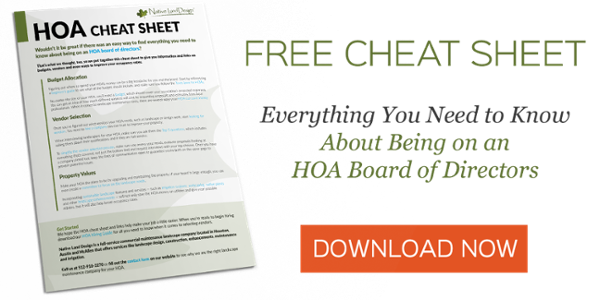 About Grant Jones, Director of Construction/Design

Before earning his Bachelor’s degree in Landscape Architecture at Texas A&M, Grant traveled the world while working in the Internet Security Industry for 20 years. His experiences have helped shape his outside-the-box approach to landscape design challenges. Grant also excels at mastering many of the complex software applications used in our industry.

Ready For Native Land Design To Help You?

Thank you for investing in the community and its citizens. I would also like to express my gratitude for trusting us as a partner. It was a great pleasure working closely with you and your organization in the genuine interest of the community. Your dedication and commitment are key elements that are critical to the success of our collaborative efforts to give back to the communities we both work in and for.

View The Properties We Serve